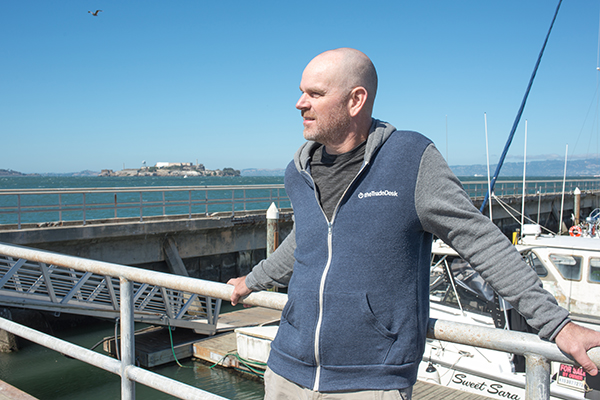 Name: Jud Spencer
Position: Distinguished Software Engineer
Who would play you in the movie of your life? Tim Robbins
If you were stranded on a desert island, what are the three items you’d want with you? A golf club (with balls), a telescope, and a huge book of matches

What is your role at The Trade Desk?

I'm part of the engineering team. I lead engineering in our San Jose and San Francisco offices, which means that I manage a team of about eight people between the two sites in addition to running some of the feature teams that we have within the company.

What brought you to The Trade Desk?

It's kind of a long answer. The short answer is that my manager here, who's the Senior Vice President of Engineering, was actually one of my employees at Microsoft. He worked for me, and about 6 months before I came to the Trade Desk in 2013, he left. I knew a couple of other people from The Trade Desk and as I got to know them better, I found that they were just great people. I was looking for a change. This ended up being a really great choice.

What does your typical work day look like, and has it changed a lot since you started three years ago?

It has in one big way. When I was hired to start the engineering team here, I was the first employee in our San Jose office. Well, we didn't have an office here at that point--I was working out of my house. Now, we have a team of 15, and it’s growing very, very quickly. We've doubled in size each of the three years that I've been here, and I expect that will probably happen next year, as well.

My typical day now starts with me getting to work around 8:00 to 8:30 a.m. I spend some amount of time doing planning work for my team, working through issues with either product management or through other members of our business team. Then, if I'm lucky, I spend the majority of my time writing code, which is what I love to do.

How did you get into writing code?

Wow, that goes way back. In junior high school, computers weren't really available for people inside their homes – I’m old – but they had just started showing up in schools. There was a consumer version of the old Apple 2 computer, which was what was in schools at the time, that was available through different department stores. I bought one mostly to play with at first, but then got very interested in programming. From there I was pretty much self-taught. I dropped out of college after one year, basically to start programming in the industry at that time. It's what I've been doing my entire life since I was about 13. 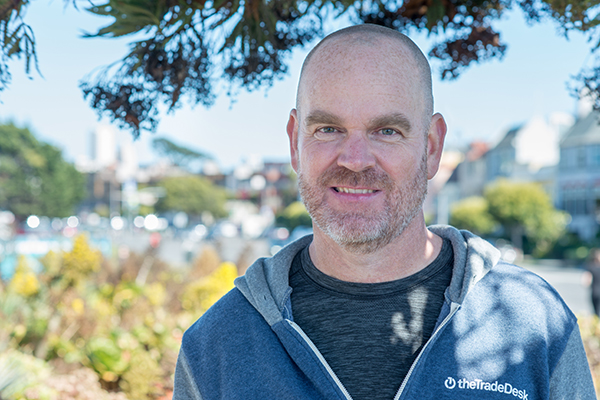 What about writing code appeals to you?

You're never doing the same thing twice, and there's nothing monotonous about the work that you do. There's very, very little repetition, unlike in these past few sentences. The challenges are changing pretty much every month, or every week, depending on the type of project you're working on. It keeps your brain going. It is something that requires a lot of deep thought, often, and a lot of focus. It's something that I like to go really, really hard on and then step away from and go relax when I'm done.

How does your team tackle engineering challenges at The Trade Desk?

Every month we plan out which tasks we have to fulfill today and which have to be done for the following month. We decide which of our customers’ asks are the highest priority. From there, we figure out exactly how we're going to get stuff done, generally in small groups of three to six. Then, we try and figure out how long it's going to take to get it done. That last part is really hard. It's very difficult to be able to predict exactly how long something will take.

From the time that you figure out what you're going to do and how long it's going to take, you can sit down to actually write the code. Quite often, what happens in the course of doing that is you run into problems that were unforeseen, even though you spent a good amount of time planning for what it is that you were going to do. That's where creative solutions come in. You have to remain on your toes in finding the set of steps you need to take to get back on track.